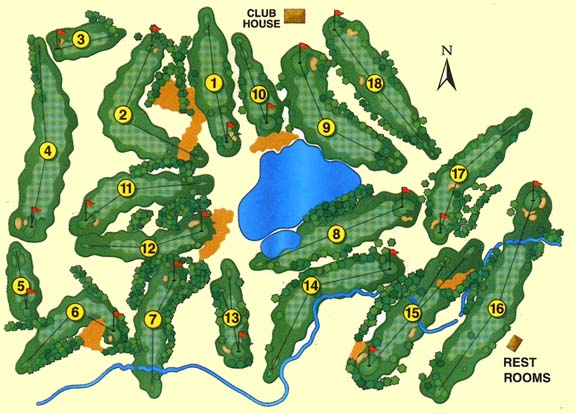 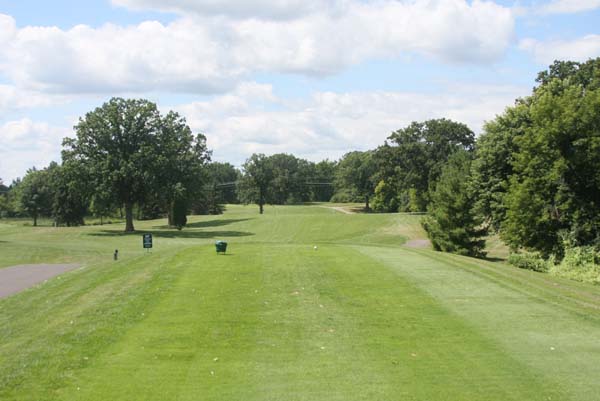 The opening hole at Rolling Oaks Golf Course is a rather short par four at 316/296 yards.Every once in a while if you play enough courses you will come across a 4 par with a large tree either in the middle or a little right or left of center in the fairway where your tee ball would normally finish. It is a somewhat rare occurrence, but here it is. There is more room to the right of the tree than the left. This should be your target where you will be left with a 9 iron or wedge to a longish green but a rather narrow green. Hitting one of your longest tee balls will probably end up in a shallow ditch about 50 yards from the green so an 80% swing is what you’re looking for off the tee box. Be aware that the green has a shallow ledge at the front but is not visible from your approach shot. 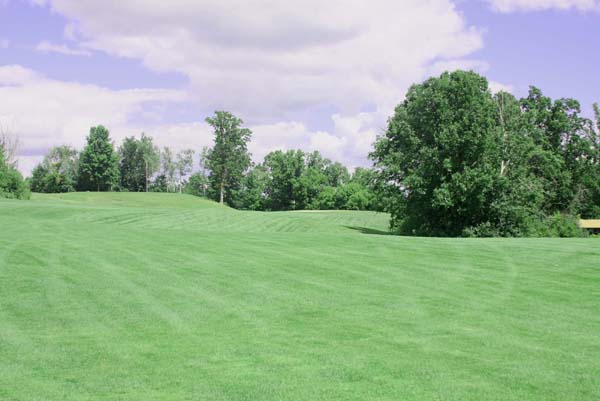 Number 2 is not your typical dogleg. At 467/449 yards, depending on the tees, it could play at either a 4 or 5 par. Also, most doglegs will make the turn at a few degrees right or left but not the triple digit 115 degrees right. To make an attempt to the green it is imperative you drive your tee ball in the direction of the center stake. Hugging the right side to closely will prevent you from a direct shot at the green; too far right (pull or hook) and you are increasing the distance to the green. A center cut drive is the best. The green slopes right to left. 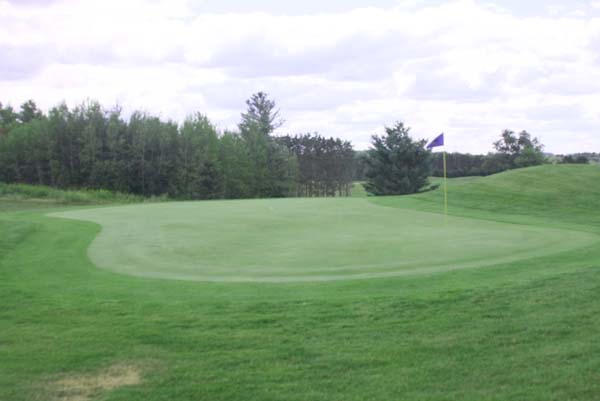 The first 3 par on the course is 161/145 yards normally into a slight breeze and also slightly uphill. The sand trap protects the right side of the green which could be defined as a sucker pin. Aim for the center of the green. 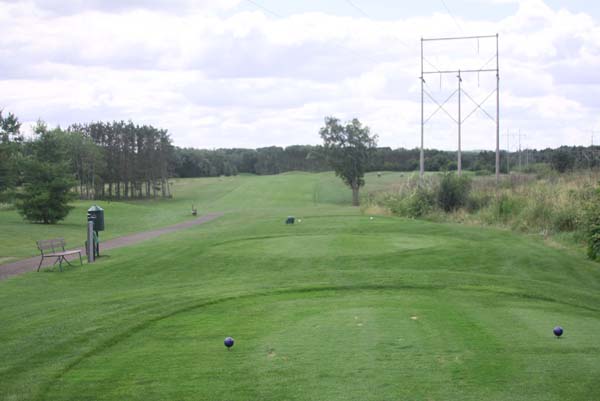 The first 5 par is a very slight dogleg right but from the tee box is played straightaway, if far enough, with a very slight fade. It measures 502/484 yards. Very heavy rough awaits the errant drive along the right side. Stay left of the oak tree off the tee. Assuming you are in the fairway, your second shot, if hit crisply, has a chance of making the green. 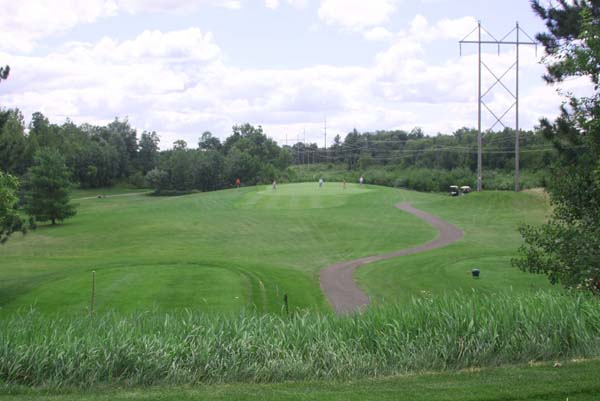 Hole number 5 is a pretty little hole when viewed from the back tees which are up on small bluff where you can look down at the green. It measures 145/117. The green is much longer than it is wide which allows pin placements shortening or lengthening the hole substantially. Either side of the green slopes away from the center requiring your tee placement as near the center of the green as possible. 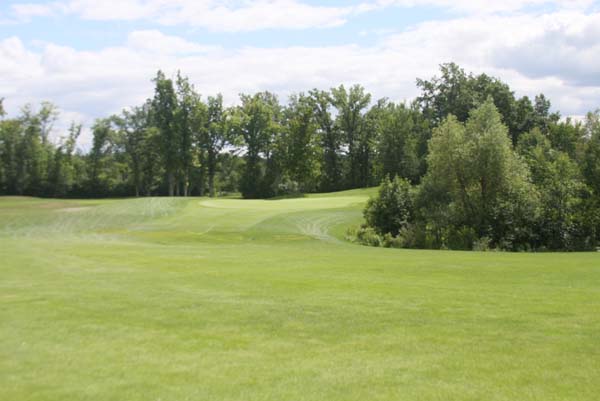 Number six is another severe par four dogleg right requiring a straightaway tee shot but then an approach 115 degrees from your drive. Placement of the drive is critical as the closer it is to the edge of the fairway, the more open the green becomes. A short drive too close the right edge of the fairway will prevent viewing the green. Aim straightaway and as long as possible. 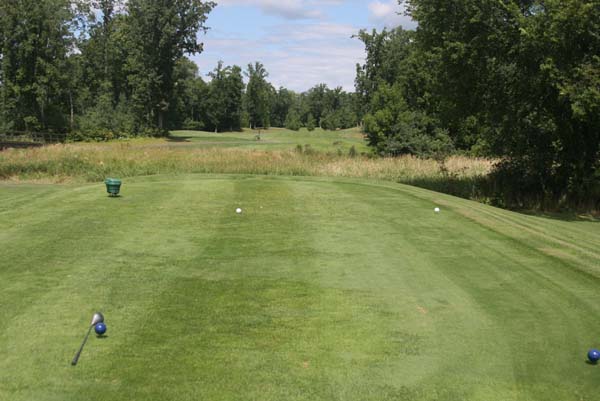 Number Seven is a short par four requiring pinpoint accuracy off the tee if you hope to have a shot to the green. Any tee ball on the right side of the fairway and your hopes of being on in regulation are nil. The ideal tee ball will be left of center. The green is two tiered. Choose your short iron carefully. The front of the green has a shelf; the slope is towards the back. 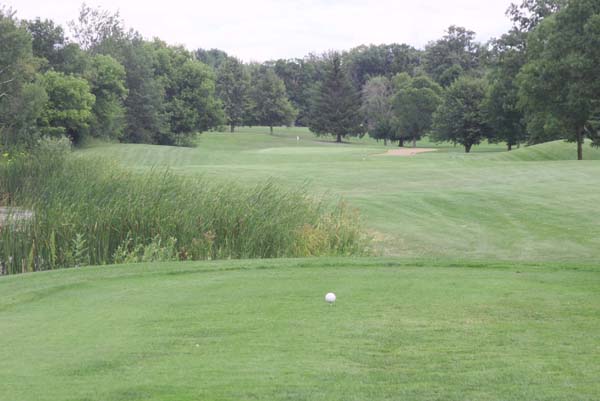 The eighth is a straight par four 367/351 whose difficulty is the green. Any ball in the fairway is a good shot. Trees left. The green accepts the well struck approach and most balls gravitate towards the center of the green. The green is longer than it is wide with a shelf on the back portion. This is considered the most difficult hole on the course and as such is the #1 handicap hole. 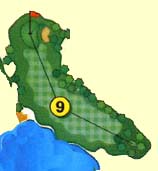 The ninth is the longest par four on the front nine at 378/347 yards. It goes without saying, the longer your tee ball, the shorter your approach. The fairway doglegs slightly right so be certain to stay away from the right side as they will prevent a shot at the green if you fade too closely. The best shot is down the center. The right side of the green is guarded by a sand trap that should not come into play. The back of the green is framed by the majestic oaks. Hence, Rolling Oaks Golf Course. 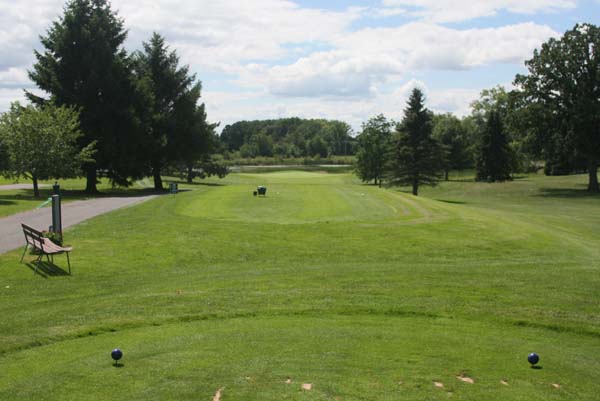 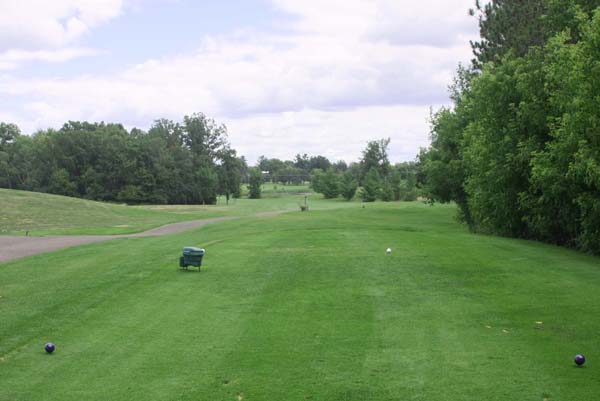 The drive on the eleventh hole requires going through a narrow shute with trees on the right and left. The further back on the tee box you go, the more narrow the shoot becomes. The hole is a slight dogleg left so if a draw is in you repertoire, now is the time to use it. The green is layered; the front layer hardly discernible from your approach which requires but a short iron. This hole is considered the easiest hole on the course and is rated the 18th handicap hole. 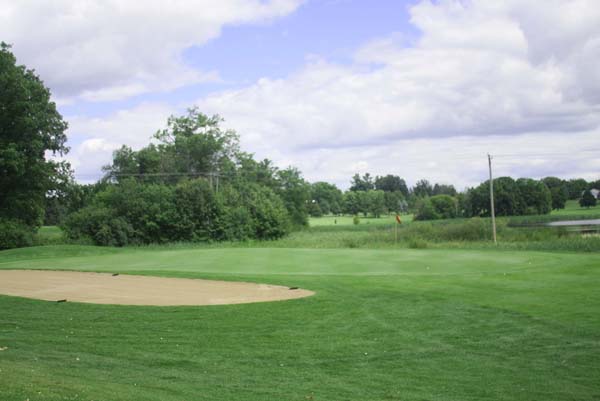 Number twelve is also a dogleg left but one that requires a drive of between 175 to 200 yards down the middle with a slight draw. The pin is usually near the front of the green but be aware there is a ledge towards the back that falls off severely. There is a large pond to the right of the green that does not come into play. One bunker that also should not come into play. 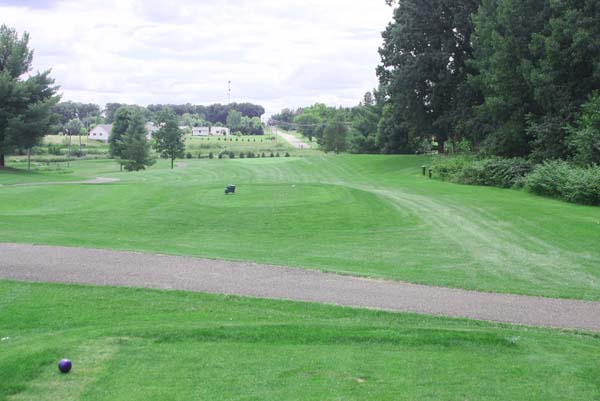 Number thirteen is the longest par three on the course at 209/175 yards. Like a well designed long par three, the green slopes towards the teeing area and accepts a long iron. Out of bounds over the green but it really doesn’t come into play. 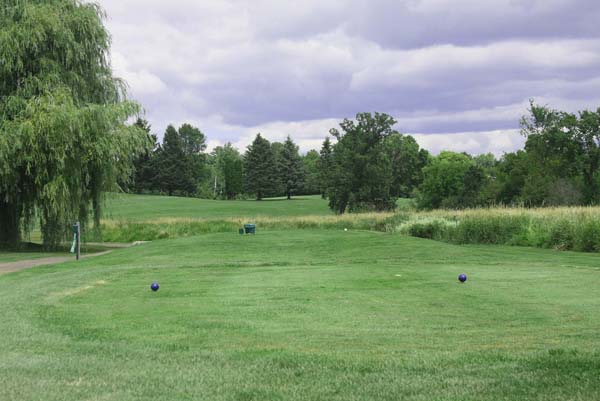 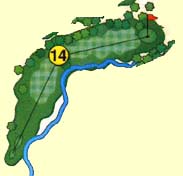 This is a rather longish par four dogleg right at 395/363 yards that requires a tee shot down the middle at the 150 yard center stake with a slight fade. Don’t try to cut the corner to much or you could end up with a lost ball in the wetlands. With your well struck tee shot you should have between 150 and 125 yards to the green which slopes right to left. The green is large but slopes away from the approach at the back. Don’t be long! 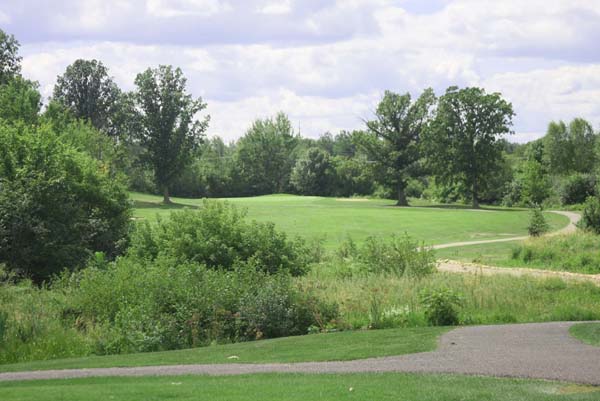 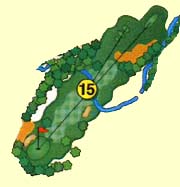 Number fifteen is a pretty straightaway par four with danger on the right in the form of wetlands and on the right is a large trap that cannot be seen from the teeing area. It measures 346/333 yards. Aim right down the middle and you should be fine. A short iron is all that is required for your approach to an uphill sloping green that is deep so make note of the flag color which will indicate the depth of the hole in relation to the front. Trap right of the green that shouldn’t come into play but prevents errant shots from being lost in the wetlands. 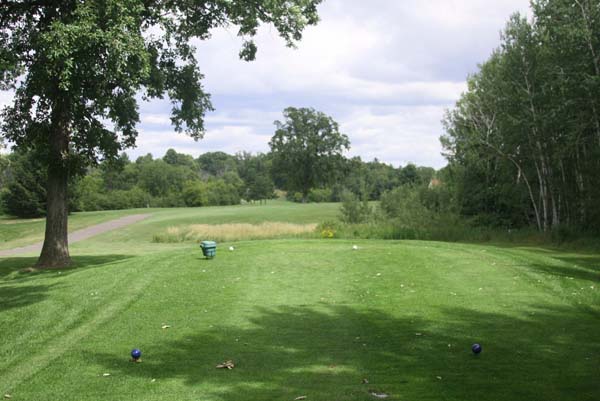 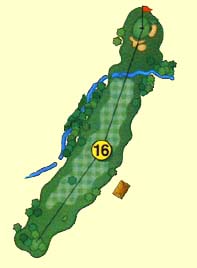 A par five measuring 500/488 yards has the unusual distinction of having a large oak tree in themiddle of the fairway. The goal on the tee ball is to get past this large oak whether you fade, draw or go over the top. Risk \ Reward comes into play on your second shot. If you’ve hit your drive long enough, an attempt at the green might be the move to make, but more often than not, the layup is the wiser choice as there is a creek you must clear. The green normally has a pin location near the front of the green. While the green is one of the largest on the course pin placements are at a minimum because of the severe slope from back to front. 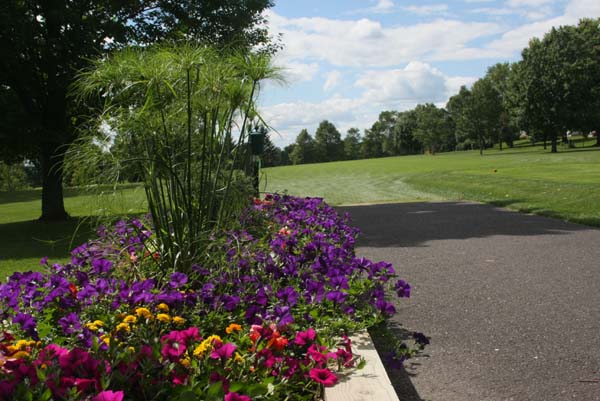 Number seventeen is a four par dogleg left that requires a straightaway drive, leaving an approach of about 110 yards. The hole measures 349/333 yards. The approach will be slightly downhill usually with the wind at your back; use one club less. The slope of the green is bowl shaped so most shots will tend to break towards the middle. 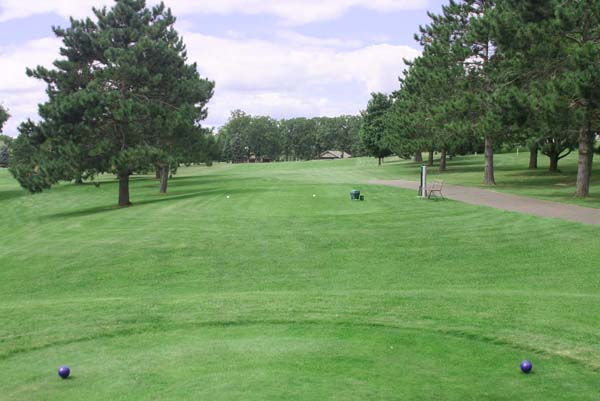 The final hole at Rolling Oaks GC is a four par typically into the wind. The well struck shot will be located near the 150 yard marker. From the fairway, there is no doubt where the green is as it appears to be surrounded by the large majestic oaks with the clubhouse in the background. A sandtrap guards the right side of the green but it should not come into play. The green is one of the flattest on the course with few undulations. 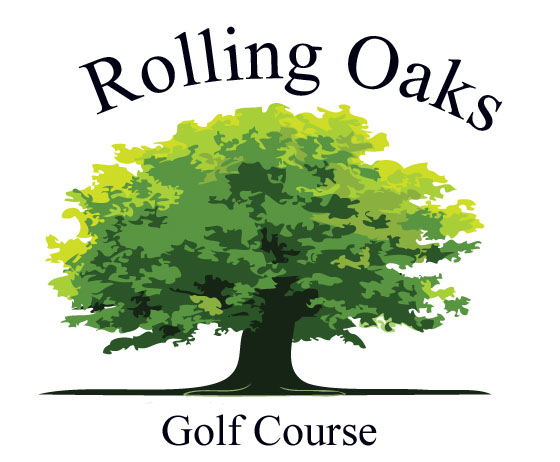